Whether it be external challenges from new competitors in the global market place, or labour or regulatory issues, conducting business has become a much more complex affair to manage.

Joining IGI will give you the opportunity to receive strategic information and to network with knowledgeable professionals from your industry sector. 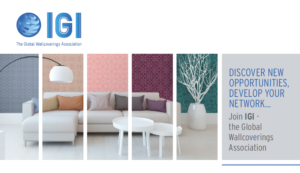 IGI is committed to meeting your business needs.

Services provided by IGI are regularly reviewed in order to match the evolving expectations of the association’s membership.

to become a Member !

Liaison with other bodies

Individual companies may become members of IGI providing that they:

Companies may become associate members of IGI providing that they are suppliers to the wallcovering industry.

to become a Member !
Upon receipt of your application, it will be submitted to the IGI Executive Committee for official acceptance.

By signing the IGI code of conduct, an IGI Member undertakes to abide by the following standards and procedures as a condition of admission and continuing membership in IGI – the Global Wallcoverings Association, be it is an IGI Ordinary Member or an IGI Associate Member ( hereafter together « IGI Members »), whatever is applicable:

B. Mutual respect
IGI Members show respect to fellow IGI Members and their employees, representatives, officers and agents as an individual, irrespective of their ethnic origin, skin color, handicap, ideology, religion, nationality, sexual orientation, social background, gender or age. Each IGI Member is obliged to refrain from any kind of discrimination (e.g. disadvantaging, harassment, mobbing) and is obliged to make a respectful and fair cooperation with fellow IGI Members possible.

C. Fairness
The spirit of fairness for fellow IGI Members is a fundamental principle for IGI membership. IGI Members support fair competition and commercial practices and undertake to comply with competition, antitrust and commercial practice laws of the European Community. Behavior preventing or restricting fair competition and/or fair commercial practices are expressly forbidden. Such behavior includes but is not be limited to prohibited agreements on pricing, quotations, terms and conditions of sale, capacity requirements which are sensitive or relevant for the market, passing-off or otherwise making misrepresentations in relation to itself, its products or services.

D. Avoidance of conflicts of interest
IGI Members undertake not to in any way defame, criticize, undermine, or take unfair advantage of a fellow IGI Member’s reputation or merchandise and should actively promote and encourage the highest level of integrity within the industry. IGI Members undertake to refrain from offering, granting, demanding and accepting benefits to or from fellow IGI Members for personal purposes, enrichment or with a view on influencing decision-making processes.

E. Undertaking of confidentiality
IGI Members are committed to protect all information supplied to IGI Members by the IGI organization in whatever form including oral, written and electronic (hereafter the “Confidential Information”).

IGI will not tolerate violations of this Code of Conduct. By signing this Code of Conduct, every IGI Member accepts all consequences taken by IGI regarding such violation, including but not limited to membership termination. The report on violation will be treated confidentially.

G. No copying
IGI Members undertake to endeavor to prevent the illegal copying of designs and the use of such illegal design copies in the wallcoverings industry. To this end, each IGI Ordinary Member shall comply with the following standards and procedures:

1. Designs for use in own wallcovering production
In accordance with all applicable laws, IGI Members shall use / supply only proprietary or duly licensed designs in relation to their own wallcovering production. In order to ensure to be entitled to the applicable intellectual property rights, including but not limited to copyrights and design rights (hereafter “the IP Rights”), IGI Members shall keep and regularly update records that contain at least the following information:
– The date of creation of the design and the name of the designer;
–  If the IP Rights in the design concerned are not proprietary to the IGI Member:
• A deed of transfer, a deed of license, a design purchase invoice or any other     document confirming the lawful use of the IP Rights in the design concerned by the IGI Member;
• In addition, IGI strongly recommends to obtain a warranty by the assignor or the licensor (whatever is applicable) of a peaceful use of the concerned design by the IGI Member (and in particular that the concerned design does not breach the IP Rights of third parties).
– The relationship between the design on file and the design eventually produced on the wallcovering;
– A copy of the invoice for the first delivery of the wallcovering containing the design.

By signing the IGI Code of Conduct, IGI Members are committed to strict compliance with these standards.

IGI is committed to compliance with all applicable laws, including competition laws.  These Guidelines highlight a number of key concepts of competition law and how it can be ensured that IGI’s competition compliance policy is observed at all times.Members of IGI should be aware that exchanging commercially sensitive information even in the context of a trade association is a potential breach of European competition law and/or the national competition rules of the EU Member States.

Correspondence, diary entries, personal notes, emails, figures agreed, documents exchanged in meetings can all be taken as evidence by a competition authority.
IGI’s premises as well as the company premises of IGI’s members and the private homes of directors may be searched in an investigation by the European Commission and/or a national competition authority. Violations of competition rules can lead to serious fines on individual members – up to 10% of each member’s individual annual turnover. IGI itself can also be fined – up to 10% of the sum of the total turnover of each infringing member.

It is strictly prohibited for IGI’s members to discuss or agree on the following:

﻿It is permissible for IGI’s members to :

Statistics prepared in the following manner will be considered as being acceptable under competition law:

In general, correspondence between the members, minutes of meetings, diary entries, notes at meetings, documents handed out at meetings and computer records (including emails) can be copied in the course of an investigation for alleged breach of competition law by the European Commission.
However, correspondence with external lawyers on issues relating to competition law issues may be protected and should be clearly marked by the external lawyers concerned as being subject to legal privilege.
Correspondence with in-house lawyers is not guaranteed protection from the scope of an investigation.  Any documents sent to in-house counsel with a view to subsequent obtaining external legal advice on competition law compliance should be clearly marked “Confidential and Legally Privileged – Documents for External Legal Advice”.
In the event of an investigation, IGI or a member should not allow copies to be taken of documents marked as being subject to legal privilege.  If there is any doubt, these documents should be placed in a sealed envelope (signed by the company and the European Commission or national competition authority) for the European Courts or national court to determine whether the documents are subject to legal privilege.

Further reading can be found on the website of the Directorate-General for Competition of the European Commission: www.ec.europa.eu/competition

Objectives of the IGI Arbitration Committee

The purpose of the IGI Arbitration Committee will be:
– to promote awareness of use of IGI arbitration and other forms of alternative dispute resolution as an expeditious and economical means of settling intellectual property disputes
– to provide IGI members with a way to preside over issues affecting the wallcovering industry while avoiding lengthy and expensive time in court over disputes

IGI has put in place a code of conduct for the prevention of illegal copying of designs in the wallcovering industry. As per the IGI Member Code of Conduct , signed by all IGI members upon acceptance into the association, the IGI Members, wallcovering, vinyl or textile wallcovering manufacturers undertake mutually not to copy the designs of any other industry stakeholder by infraction of existing copyright or by any other unfair means.

– Should the President or Chairs not wish to participate in the IGI Arbitration Committee, it is their responsibility to select a replacement from their respective Committee.

The IGI Arbitration Committee will preside over disputes as a service provided free of charge to parties involved in the case applicable to both IGI members and non-members.

The plaintiff party refers the matter for dispute to the Chairman and notifies the case at the same time to the defendant as well as the IGI Secretariat.

The Chairman convokes the members of the Arbitration Committee at least 21 days before the meetings.  He/She also convokes the two parties via letter within the same time limit.  He/She asks the defendant to explain its point of view in writing within a fixed time limit.   The defendant will also have to notify its standpoint to the plaintiff.

Before the meeting, the Chairman asks for the complete file relating to the dispute.  He has the right to ask for technical advice from the Technical Committee in order to have a clear insight into the problem and the liabilities concerned.

If the plaintiff or defendant or a legal consultant is not present, although having been convoked, the Arbitration Committee reserves the right to make decisions.

Either of both parties can make proposals to the Arbitration Committee to settle the    dispute. The task of the Chairman is to conduct the negotiations.  If parties waive these, they will not take place.

Decisions
If the Arbitration Committee concludes that there has been an infringement of the engagement  of the agreement and if the parties have not reached an agreement on the settlement of the dispute, it can make an award based on the content of the deed.

The decisions, which can be taken by the Arbitration Committee, are the following:
– a warning or a blame
– withdrawal of the copy from the market

The IGI Technical Committee’s purpose is to advise IGI on technical matters of common interest transcending corporate and national boundaries. The committee aims at establishing criteria and standards of performance of wallcoverings when used by the ultimate consumer. It liaises with national and international standards associations and trade associations to ensure the industry’s freedom to trade and to maintain a common industry response on technical matters. The Technical Committee meets 2-3 times a year.

The IGI Executive Committee, working with a high level participation and support from IGI members is committed to address common goals such as ethical practices, quality standards, aesthetics, functionality, and innovation, and believe they can solve global problems more effectively. The Executive Committee meets 3 – 4 times a year.